Tips That Will Help Increase Speed In Your Muay Thai Footwork 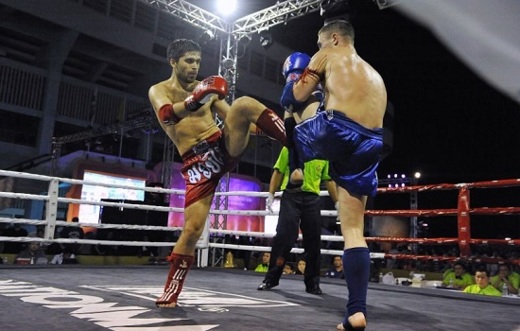 Quick foot movement is an essential element of Muay Thai training. Quick footwork enables a fighter to swiftly slip out of the attack range of the opponent and places you in favorable positions to throw your blows. Great footwork is a signature of a professional Muay-Thai boxer. Some individuals do not face any particular hindrances in understanding the footwork implemented in MMA sports like Muay Thai, but it is not as difficult and anyone would be able to move swiftly if a persistent effort is placed at the training gym. A Muay Thai boxer must understand the importance of footwork as success without efficient footwork is limited. Fighters find footwork drills boring and not interesting as blowing/ punching techniques at a heavy bag, but it is the necessary part to learn so that you can master and become a professional Muay Thai fighter.

Check out our Coaching Equipment!

There are innumerable ways of practicing footwork to make your movements smooth and fast in Muay Thai training sessions. Muay Thai comprises a wide range of martial arts tools that make use of fist punches, kicks, arms, and knees to launch an attack, this suggests that a boxer needs to defend himself against the rival’s attacks from every direction. The more efficiently you move during the match, the harder is for your rival to land a blow on you. A moving target presents difficulties in landing a clean shot. To begin your speed training look for a large space where you would be able to move without any hindrances. It is recommended to work in the ring as it would provide a real-life training situation. Try to practice footwork with your gloves on. It would give you a chance to get used to the feeling of wearing gloves as you practice your foot movements. Wear apparel that does not obstruct your free movements like wearing Muay Thai shorts which are particularly designed for quick responses.

To understand the science behind moving faster and formulating attack positions to launch your attacks on your rival and defend yourself from their attacks, we formulate some footwork drills that you need to inculcate in your daily MMA training.

1. Warming up the ankles

You need to go through warm-up sessions before practicing footwork training. Warm-up exercises should focus on your ankles because all the footwork movements put a strain on them. You can opt for traditional warm-up exercises like calmly jogging to relax the joints, bring the muscles into action, and increase your heart rate.

• Move one of your feet forward, that the distance between the toes and the wall remains nearly 6 inches.

• Move the other foot backward to some extent, the heel should not be elevated from the ground and hips must be parallel to the wall.

• Try bending the knee of the forward leg and touching the wall.

• If it is easy for you to touch the wall with your knee joint, then increase the distance of the foot in a backward direction farther.

• Keep on moving the foot back until you reach a point where you cannot touch the wall.

• Repeat the drill for 25 reps for each foot.

Mastering Muay Thai involves grasping the basic knowledge of every movement you make inside the ring. The essential component of footwork is equilibrating your body and your solid firm on the ground while striking. Maintaining a solid stance enables you to avoid balancing off and making you vulnerable to your rivals’ strikes. Your strong stance is that base that enables you to transfer energy from your lower limbs into your strikes. A weak stance disarms your body’s balance, giving more chances to your rival for a knock-out. Learning to maintain your balance, you need to practice drills to keep the center of gravity and keep the desirable distance between feet to make your foundation stable.

• Maintain your traditional Muay Thai stance while imagining a pole between your feet.

• Place a foot forward, and the other foot backward, again making your body in the starting stance.

• Take five steps in a forward direction with your front foot and move your rear foot along with it.

• Move your front foot forward to take five steps and bring your rear foot along with the front foot.

• Now place your front foot to five steps in the left direction and move your rear foot accordingly.

• Take five steps towards the right.

Brisk movement allows you to quickly escape the range of the opponent’s attacks which is better than blocking the attack. Swift movements with speed enable you to escape any strike from the opponent and he finds it difficult to land a clear shot on you. Speedy movements allow you to reposition quickly, providing you with open attack zones where you can go for a clear counter- attack.

• Maintain your balanced stance with your fists in front of your face.

• Place your rear foot a few steps towards the right and the front foot behind it.

• Swirl your rear foot external to your body and keep the angle at 45 degrees.

• Do not swirl your rear foot, rather pivot your front foot externally making it parallel to the rear foot.

• Change the direction by pushing your forward foot, making it perpendicular to the beginning of your movement.

Incorporating these techniques in your Muay Thai training would make your movements smooth and swift.

Keynote: Speed is a foundational element in the progression and success of MMA including Muay Thai. Speed plays its role both in defense and offense as speed enables one to strike with greater force. Swift and rapid movements allow you to escape your opponent’s attacks and give you an opportunity to reposition to launch your attack.