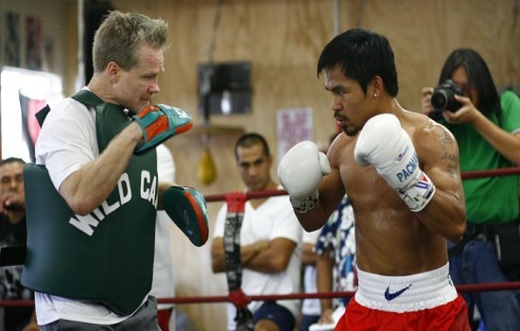 After the achievement of basic knowledge of boxing and initial sparring, every boxer would instinctually gravitate towards a particular boxing style. Entering the competition does not mean random attacks and punches. A boxer needs to have planned the whole strategy and particular techniques to dominate the ring . To plan these strategies and tactics you need to learn about the different boxing styles particularly the one you should adopt and the type that your rival will use. Every boxer adopts a different boxing style depending upon his skill, body type, speed, strength, endurance capacity, and personal liking. There are many boxing styles such as brawler, counterpuncher, slugger, boxer-puncher, and the swarmer that are used to define the boxers. As one goes on practicing, he would eventually realize the boxing style that suits him or he may periodically change his style depending upon the need.

What Is the Swarmer Style?

A swarmer also is known by the name of Pressure-Fighter or crowder or the Close-In Fighter. Swarmer style is a pretty exciting boxing style that involves constant aggression, relentlessness, and devastating fighting. A swarmer fights close, with a constant flurry of punches until his rival gets down. They aim to hit fast and bears phenomenal speed, rather than striking hard. They may also launch various types of punches to break down the rival’s defenses. Throwing inside punches fouls the opponent’s ability to launch counter-attacks. The continuous pressure of the punches on the opponent does not provide your opponent a chance to launch his attacks making you dominate him. Great punch needs great gloves. Check boxing gloves here .

Features Of A Swarmer

Swarmer style bears remarkably amazing footwork capabilities. A near-range player wants to maximize the effect of his attacks and creates pressure on the rival. They move from left to right to dodge. And shift to launch counter-attacks. All these movements are possible by solid footwork that enables the fighter to fight in the approach of an opponent, without becoming vulnerable. Fighting inside a swarmer constantly delivers a flurry of blows, and quickly steps back in defense due to their outstanding speed. Close-In Fighter must also be aware, how to clinch his target tactically to maximize the effect of the blow. Holding your opponent to move him around the ring, distracting his attack, disturbing his time of the attack, preventing him from landing combos, or reducing his speed could be your aim to handle your rival tactically by using clinch.

Reasons To Opt For Close-In Style

As already discussed, that choosing a style depends upon various factors like body style, strength, speed, etc. There are several reasons that a player opts for a swarmer style.

Boxers with a short height usually choose swarmer style as it makes them out of reach of taller rivals. Long-limbed fighters are more comfortable in hitting from a distance rather than in-close fight. They keep their opponent at a far range, on the other hand, a swarmer exhibits in-close fighting and hits within the range of the opponent, this causes the long-range fighter to eliminate his distant attacks. He would not probably hit effectively and also finds difficulty in defending himself.

Domination In The Fight

The pressure fighter does not wait for the opening to appear rather he creates an opening to hit the target. Their relentless and aggressive fight mode compels the opponent into responsive action. A pressure fighter makes the rival act according to what he desires to implement his rhythm and strategy on the rival. In this way, a swarmer’s opponent gets trap and constantly searches for the chances to escape to a safer spot or he may end up in his defensive mode. Moreover, a swarmer is well aware of clinching his enemy to control the battle. He would launch a clinch to distract the opponent from his rhythm and low him down. Clinching is also used to move the position of the opponent strategically corresponding to each other.

Dominating The Defensive And Long-Range Players

Outside fighters and defensive fighters can be brought down by a swarmer style. A defensive player would not be able to maintain his defense under a constant burst of blows and would eventually drop his guard. While in the case of a long-range player, his technique would fail as his opponent would be in a close range rather than in long-range.

How To Counter A Pressure-Fighter

If you face an opponent with a swarmer style, the easiest way to deal with him is to adopt Brawler-style boxing. A brawler uses his power, strength of attack, and robustness to overcome a swarmer. A brawler fights in close combat and launches series of attacks and knocks down the rival with powerful blows. This technique sounds simple and easy, but mastering the brawler-style technique needs a lot of strenuous training. Another way to entangle a swarmer is using a clinch. If learning brawling style is not possible, you can learn to effectively use clinch against your opponent. To use clinch against a pressure fighter, move him against his desire to control the fight. Lower your fulcrum and maintain a solid stance to resist your rival’s force to push you back. If you are trapped in a clinch by your opponent then let him bear your weight. This causes him to carry your load as well as try to push you around the ring, causing him to wear out and draining his energy unproductively. You must exhibit excellent speed and footwork to perform this strategy. You need to have a comfortable pair of boxing shoes so that you do not feel tired or be confident while your footwork. Use your speed to manage the distance. Your footwork would enable you to move sideways and prevents you from grounding by pushing backward. Lastly, launch a flurry of punches rather than just a hard punch to the swarmer. Although a pressure fighter bears a lot of advantages it can be conquered if countered strategically.

Keynote: Every boxer has a natural preference over the boxing style they want to choose, which depends upon various factors. Swarmer is one of the most adopted boxing styles, as it comes with many advantages. It involves a flurry of punches and overcomes the physical advantages making it effective in tournaments where knock-outs are rare.