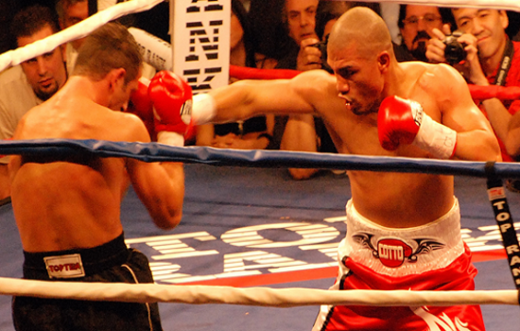 The Out-Boxer fighting approach is truly a graceful and technical style that exhibits wonders in the boxing ring . It is the opposite of the swarmer style and utilizes long-range fighting. An out-boxer extends his punch to keep his opponent far while dodging the counters and slipping the counter-attacks. But the hard part of this style is, that it cannot be perfectly performed by just anyone in the fight. As a swarmer style is limited to short-taller boxers, the Out-Boxer style is for long-taller boxers. It provides the advantage of extended reach over the opponent for a long-limbed fighter. Moreover, an Out-boxer style can be adopted by a boxer with strong endurance, amazing footwork, and extremely strong command on slipping around the ring. The basic and essential components that must be adopted by a boxer to be an Out-Boxer have discussed.

The Out-boxer or Pure-Boxer seeks to keep a gap from his opponent, as he is trained to battle at long ranges. Fighting at a long-distance provides him with an advantage to land punches to his rival where his rival is unable to reach him. An Out-Boxer approaches his opponent with a jab to create separation. Maintaining a specific distance from the opponent all the time provides him with the opportunity to strike and avoid the blows from the rival. An Out-Boxer gets a chance to make smooth slips and dodge the counters.

How Do An Out-Boxer Manage Position?

An Out-Boxer primarily utilizes two ways of managing position. The first tactic is speed and agility, they are known for their extremely quick feet. Their mobility to move away from a rival is outstanding. During the battle, a boxer needs to dodge, slide away and slip his opponent’s attacks and make him run after him. This strategy would wear out the opponent and make him accessible to counters. The second tactic is to utilize the strength of your jab and cross to keep your enemy at a safe distance from yourself. The out-ranged punches enhance the Out-Boxer’s range which keeps him safe from the opponent’s counters. Both of these strategies are planned by an Out-Boxer to maintain a gap. Other than these tactics, the fighter may land powerful straight blows to the head and the torso as his offense. Launching a hook or uppercut requires an in-close fight, which would eliminate his reach opportunity. That is why Out-Boxer wins the fight by decision rather than by knockouts.

1- Utilization of footwork and jabs to create distance between yourself and your rival after hitting quickly.

2- Out-boxing is characterized by a succession of blows that wear out the opponent to gain an upper hand in the battle.

3- Out-Boxers have super stamina due to the roadwork they do.

4- Being light-footed, they bear tremendous speed.

5- They are usually distance runners rather than sprinters.

6- Out-Boxers move carefully by calculated moves, to avoid any mistake. They do not go for knockouts but knockouts can be possible in long bouts when the Out-Boxer has launched enough punches to wear down his rival. Check out all the Fitness Equipment

Reasons To Opt For Out-Boxing Style

Based on the physiological feature of the boxer, the taller boxers would usually be at an advantage over the shorter ones for the same weight as the boxer. At a particularly given weight, the mass to musculature ratio of a shorter boxer is more than the taller boxer. This means that the chances of winning the fight for the taller boxer are more than the short one in a situation where just the trading of punches occurs between the two fighters. The more muscular short fighter stands less chance against the taller one. This imbalance of strength may cause trouble for both fighters, to overcome this imbalance, the taller fighters keep their opponents at a distance. They are inclined to opt for a reach advantage over the power. This style is amusing for a fighter who aims to launch a flurry of attacks, and then fall back rather than to be an in-close fight.

How To Beat The Out-Boxer

Facing the Out-Boxer can be tricky but possible, while encountering an Out-Boxer in the ring do not aim your punch to the head initially. As you would need to work out hard to be nearby so, do not decrease your effort by trying to land a blow as well as trying to be in close reach. You need to look for the open part of the opponent’s body that is the most vulnerable. Moreover, slipping the attack to the head is far easier than slipping a blow to the body. Aim for the vital organs that would hurt the most, successive punches to the torso would deteriorate the opponent’s ability to use his legs. This would cause poor footwork and the inability to dodge efficiently. Always escape the clinch. If you get trapped by your opponent, don’t get too hostile and get yourself into a grappling mode. A long-limbed boxer always has the advantage in the clinch, as he would trap you and let his weight on you to bear it until it wears you out. A swarmer can beat an Out-Boxer, as an out-boxer is most susceptible to swarmer who are agile and move quickly with their overwhelming punches. But Out-boxers are cautious and make smart decisions in striking their blow rather than wasting their stamina. Try to maintain your distance at a medium-range, to avoid getting wrapped due to close range. Remain just close enough to land a blow and avoid clinching. In this situation, your blow will have the maximum effect, and the rival would be deceived by your bout. Maintaining medium-range combat is easy said than done. But once you master it, your opponent would never get a chance to stand against you.

Keynote: Out-boxing style is one of the traditional boxing styles, which enthusiast the boxing fans the most. Out-Boxing is the best tactic for the taller boxers, who prefer to out-fight and keep their opponent at a far range.