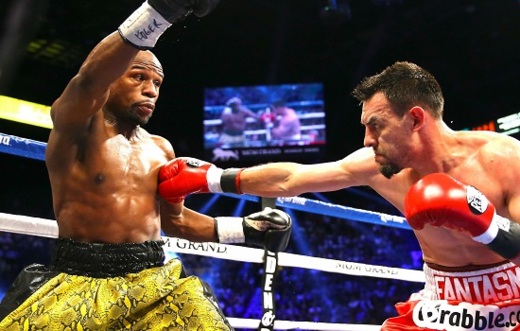 Boxer-puncher is a hybrid of all the boxing styles, possessing the technical skill and grace of swarmer and devastating strength of a slugger. Amazing footwork to fight in different combats and massive punch power that brings the opponent down in a single blow. Considering the success rate of a boxer-puncher style, this would be the best style to adopt by every fighter. As multiple techniques are to be mastered to equip yourself with a boxer-puncher style, it is difficult to master. You need constant training and dedication to master every aspect of the boxer-puncher style. Keeping your focus simultaneously on two different aspects of fighting styles is difficult. So, you need to fully develop your skills to acquire speed, power, footwork at the same time.

What is a Boxer-Puncher Style?

The three boxing styles other than boxer-puncher have weaknesses against each other. The strength of one style is the weakness of the other style. The Boxer-puncher is at an advantage to lack this weakness and bears a handful of tools against any kind of boxer. They can opt for a skill that weakens their opponent’s boxing style. The boxer-puncher bears hand speed, amazing jab combos, and counter-punching strategies than a slugger. They can move out of the attack zone of a slugger, with a better defense and possess slugger-type punch power. Facing a swarmer, the boxer-punchers are able to launch aggressive attacks on the inside. They are better able to land power punches in close combat while facing an out-boxer. They have a better option to utilize all of their tactics in the game strategically. In the initial rounds, they play like an out-boxer by tiring the rival through long-range attacks. After wearing down the opponent, shift to the slugger style, get in close combat, and start launching power blows for knocking out the opponent.

Specifications of the Boxer-Puncher

Due to its versatile fighting style with a combination of the two foremost styles, it possesses no weaknesses. Many of the outstanding boxers in history marked wonders by adopting this style. When this style is learned with perfection, it is almost impossible to beat. But not every boxer can opt for the boxer-puncher, it requires certain specifications to be fulfilled to master it.

This style cannot be chosen by any fighter, a fighter needs a particular body build to perfectly launch the boxer-puncher style. You must be able to blow your attack effectively to the opponent at a fairly long distance. Along with this, you need enough muscle strength to land a destructive punch for a knockout.

A boxer-puncher needs to master all the aspects required for an unbeatable boxer. You must excel in your agility, endurance, footwork, strategy, fighting technique, and many other features. You cannot just rely on a strong jab or a good hook. A boxer-puncher carries with him the whole set of tools to become the most competent fighter in the ring . You need the skills to become a good aggressor and a good counter-puncher. You must spare more time for the training and sports to develop into a boxer-puncher. Strong determination and willpower must be indulged in your training to become the sort of player that others fear to encounter.

Defenses against a Boxer-Puncher

Encountering a boxer-puncher in the ring is the toughest fight to handle. In the history of boxing, most Boxer-punchers fail to other Boxer-punchers mainly due to the adoption of the wrong fighting strategy. Their dynamic fighting style makes their defeat a quite challenging situation. As tips to ruin the strategies of a slugger or a swarmer have been discussed, here we will present to unite both the tips into a single strategy against the boxer-puncher.

• Guard against the boxer-puncher

As we know that as a slugger, your best protection of yourself against the immense-power punch of the boxer-puncher is to avoid the blow. Although a boxer-puncher may have better footwork than a slugger, the basics of power punch still reside in developing a strong grip by the feet onto the ground to launch a destructive punch. In such a situation, keep moving and keep out of the range until you are ready to make your attack. In this state, you are still prone to get hit by the great jabs of a boxer-puncher, but it would keep you safe from getting explosive blows from a boxer-puncher.

Offense Against A Boxer-Puncher

A common tactic while dealing with both the slugger and the out-boxer was to tire the body. Targeting the body would make a loss of many advantages a boxer-puncher bears. Aims at the main body are difficult to see and harder to avoid or defend. Over time constant hitting to the torso tires down the boxer-puncher and reduces the foot movement or ability to launch devastating punch. get aggressive like a swarmer, through constant jabs, slip away, and jab again. Disturb the rhythm of your opponent. as a slugger, find your way in close combat and through flurries. Remain at a medium-range to work with your power punches to the maximum. A boxer-puncher although bears every skill but does not specialize in any. They do not have the extreme endurance of a swarmer or the pure flexibility of a determined slugger. Make the boxer-puncher in defensive mode and keep on launching constant hits to the torso making them vulnerable. This vulnerability will provide you a chance to counterattack with your traditional technique. In general, the boxer-puncher does not have the mobility and defensive approach like that of a pure boxer. Check here for Best Boxing Gloves

Keynote: Boxer-puncher is the most dynamic boxing style that essentially combines the best of all the fighting styles under a single umbrella. Their versatility can beat any rival fighter since they focus on speed and power, they can wear out a swarmer, take over an out-boxer, and out-punch a slugger. Beating a boxer-puncher is difficult but not impossible, if particular tactics are followed against a boxer-puncher that puts him in a vulnerable position one can find victory.